Shire the amazing horse and the loss of a dear friend

I lost a dear friend of mine in a hunting accident. He was an amazing man who thoroughly loved people and God. He left me and everyone around him a legacy. This is his story.

John went hunting alone at about 2pm on a cold December day. As usual he called to let me know he was setting out to bag "That Trophy Buck" and although he seldom did,  I always believed him. See, he wasn't just a hunter. He was an ace when it came to self sufficiency. A true sportsman. After his call that day I went about my day of chores. That evening his wife called and said he didn't make it home. Moments later I arrived at his truck still parked at the side of his favorite spot to hunt.  It was not terribly abnormal for John to come in after dark but this was well after dark. The consensus was that he may have gotten lost while tracking a deer and I assured John's wife I'd find him.

I tacked up my horse Shire with a gun and a lariat and took off into the forested hills here in Tennessee. Shire is my go to horse for anything around my ranch from beginner riders to roping steers. However, she was a born reject. She was the product of a system in which scientists inseminate mare and extract their hormones for women who cannot produce them naturally. The offspring as a result is usually discarded or orphaned. Shire was an orphan. Without a mom to teach her right from wrong she did pick up some bad habits and was later rejected from a riding school for being unsuitable for what they needed, and rightfully so. She would buck at the lope, pin her ears, cow-kick during groundwork and act aggressively with other horses. However, with consistent training she has flourished in the years I've owned her and has become a horse I fully trust and will do anything on.

While searching that night, Shire and I traveled through thick forests and fields calling loudly for my friend while pausing from time to time to listen for replies. I covered miles of hillside country eventually landing on a road. I trotted the road back to a strip of woods close to his truck and dove down through them to make a short cut back. The woods were dense with many low lying limbs so I laid down in the saddle and loosened my reins for Shire to find her way through. Suddenly, Shire's behavior changed and all at once she stopped. During our trek we passed a multitude of deer, roosting turkeys, and even a skunk. This time though, something was different. She had been focused on her job before. This time she froze!

I sat up and hollered for my friend one last time before heading back to the truck. JOHN!!! The slightest sound replied in the form of "help". I looked up and there was my friend hanging from his safety harness in a tree. It was immediately clear that his climbing stand had fallen to the ground and the harness kept him from falling with it. Within seconds the situation was assessed. He was in and out of consciousness so I started dialogue asking questions I already knew the answers to. It was amazing to me how brave this man was in this situation. He was calm and decisive. He expressed concern that he would lose his arms as he had been hanging in the harness with them pulled above his head for 6 hours by then. I quickly used Shire and my stirrup to push the deer stand high enough up the tree trunk to place under John's feet.

I couldn't take the chance of cutting him down. He would certainly be hurt if he fell. However, I was not strong enough to lower him down myself. Once stabilized, Shire and I flew back to get help. Emergency teams arrived quickly and we lowered my friend down safely to the ground. As they tended to him, I laid on the ground praying that he'd be okay. My heart swelled as Shire continued doing her job by standing patiently and quietly near the commotion of the sirens, strobes and people scurrying about. A friend took her back home for TLC. An ambulance took John and me to the hospital where his family and friends surrounded him.

The next day, I laid on the ground next to my weary, sore horse and just rested. Many emotions stirred in my mind. One being gratitude. Gratitude to my mare Shire. It was the performance of her life. The one we'd been training for all those years. She was brave as she carried me through the dark forests of strange animals. She was sure-footed on the bluffs. She was still and quiet when it came time to listen. She sensed my friend's presence and I can't help but believe she chose the route through the woods because she knew what the objective was.

In the end, my dear friend passed away two days later but I just can't help but believe that God used my "reject" to give a great man and his family one last goodbye. 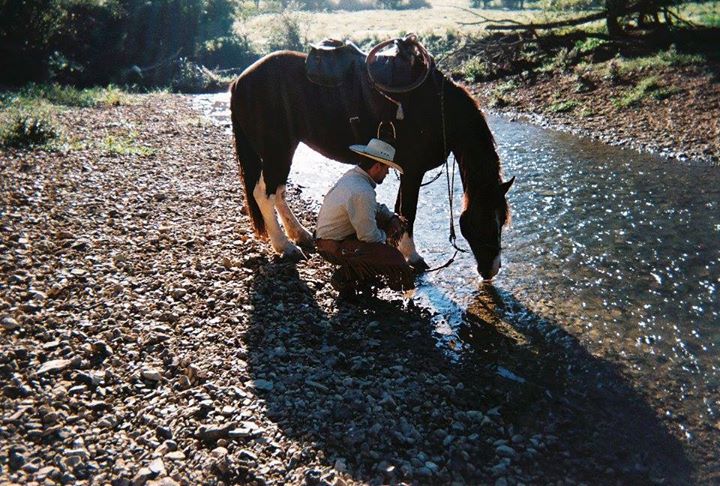 You need to be a member of Tennessee Trail Riders to add comments!